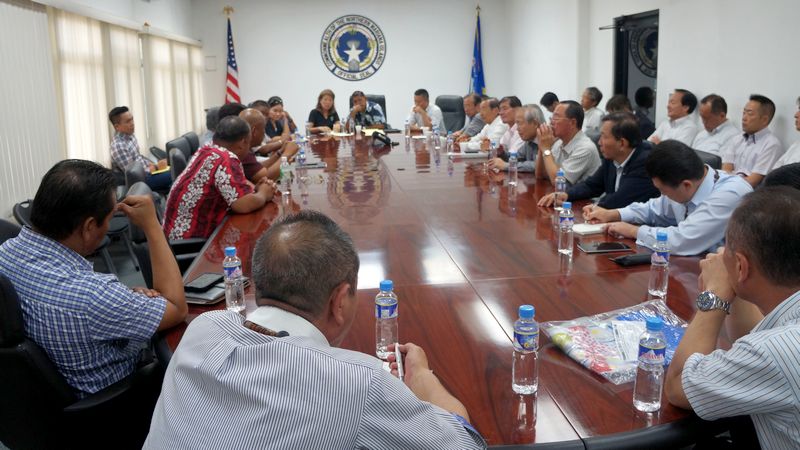 Marianas Variety – Nov 17, 2016 – MEMBERS of the Japanese Diet or parliament representing the Shizuoka Prefecture were on Saipan recently to look into the establishment of a Shizuoka Prefecture Memorial and to perform a shrine commemoration ceremony.

The delegation was headed by the mayor of Hamamatsu Shizuoka, Japan, Yasutomo Suzuki.

He and the members of parliament conducted a memorial ceremony on Saturday at Banzai Cliff and the Last Command Post in Marpi.

While here, the Japanese delegation met with Marianas Visitors Authority officials and was accompanied by acting MVA Managing Director Judy C. Torres during a courtesy visit to the governor’s office on Monday.

During a meeting acting Gov. Victor Hocog and some members of the CNMI Legislature exchanged ideas and information with the visitors regarding local infrastructure, healthcare, tourism, agriculture and sports.

They also discussed the historical relationship between Japan and the NMI and how to further strengthen their ties.

Hocog said the administration is looking forward to continuing the dialogue with Japanese members of parliament.

According to Rep. Angel Demapan, “It was a brief visit, but we took the opportunity to share with them some of the commonwealth’s concerns regarding healthcare needs, infrastructure, and waste-to-energy options considering the emerging capacity of the Marpi landfill. The Japan officials said that these were some issues that they were interested in looking at to see what can be done in an effort to assist the commonwealth.”

Rep. John Paul Sablan said they had a good discussion, including“how we can improve our transportation, tourism industry and the hospital and how they can help us,” he added.

“They want to hear from CNMI policymakers regarding some critical issues and challenges such as water, power and sewer as well as health and welfare. They want to get a clearer idea of our infrastructure, and determine how they can be of help to the commonwealth. They were happy to hear from us and to be exchanging ideas with us as that is their main goal — to strengthen ties with the islands.”

The NMI, Palau, the Marshall Islands and what is now known as the FSM were administered by Japan from 1914 to 1944.