A meteor shower she witnessed while a student made a deep impression. More than a decade later, her startup Ale Co. is working to provide artificial shooting stars on demand for festivals, civic events or any other occasion that calls for fireworks of a more astronomical quality.

“I don’t just want to sell the stars, I want to pair them with exciting events on the Earth so people can enjoy them,” said Ms. Okajima, who previously worked for Goldman Sachs and holds a Ph.D. in astronomy.

Ale is one of an increasing number of Japanese space startups attracting attention and investment. In March, Singapore-based Astroscale Ltd., which was founded by a Japanese man and plans to help clear space debris, received $35 million in funding, including $30 million from a Japanese state-backed investment fund. The same month, Japan’s space agency announced it would work with Japanese venture ispace technologies to create an insectlike robot to explore the moon. 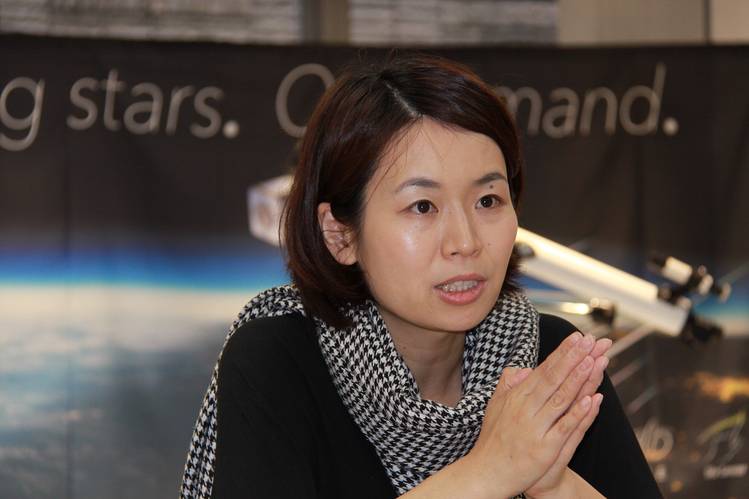 ENLARGE
Lena Okajima, founder and CEO of Ale Co., a Tokyo-based startup, spoke during an interview with The Wall Street Journal in May. Ale aims to launch by early 2018 a satellite that can provide on-demand shooting stars.PHOTO: MIHO INADA

“There was a surge in space venture companies, especially in America, and as a result companies in Japan started to think that they too should look into space,” said Yuya Nakamura, chief executive of Axelspace Corp., a startup that develops micro satellitesweighing less than 100 kilograms.

Axelspace, which has worked with Ale, said it secured ¥1.9 billion ($17 million) in a round of funding in November.

Prime Minister Shinzo Abe last year approved a new space policy meant to stimulate investment, largely for defense purposes. The government has said it wants to increase sales of space-related hardware, and has raised the budget for space-related projects.

Ale’s work may not have obvious defense applications, and that is fine with Ms. Okajima. She’s more interested in “space entertainment” and the chance to be a trailblazer. “I’ve pursued this project for many years because I’m fascinated by the idea that the field can be developed through our own research,” she said.

The five-person company is working to launch a satellite by early 2018 that will eject tiny balls in space that will burn as they fall back through the Earth’s atmosphere, like the space dust and rocks that appear to those on the ground as shooting stars.

The Tokyo-based company is working with the help of several university professors to develop the balls, which are roughly one centimeter in diameter, and the technology to shoot them from the satellites in zero gravity.

The company said it was working with relevant organizations for ensuring space safety, such as avoiding any potential risk to other satellites. It said it has developed software that calculates the probability of the balls colliding with other objects.

“The particles will not be discharged unless safety is confirmed. In a rare case that there remains a question in safety based on the simulation, we will abort the discharge,” the company said.

Ms. Okajima said the company also hasn’t determined how much it would charge customers for a display, but suggested that the cost of one ball would be comparable to that of a large firework.