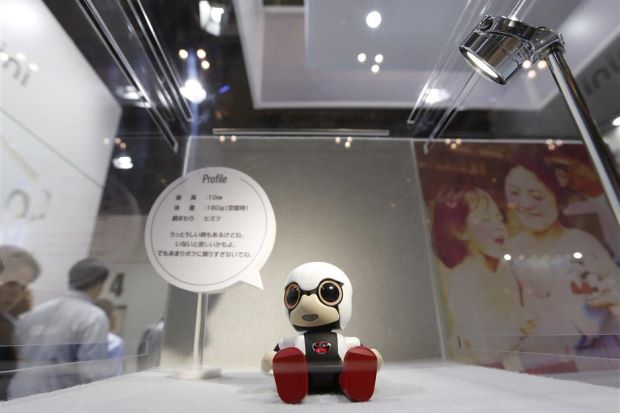 Katsumori Sakakibara was showing off his little droid called Caiba at the Cutting-Edge IT & Electronics Comprehensive Exhibition (CEATEC), which kicked off Oct 4 near Tokyo.

Waist-high Caiba – whose name means hippocampus, a key area of the brain, in Japanese – is controlled by a human wearing a virtual reality handset and mechanical arms.

If the person waves their arms, the little robot follows suit. But whatever Caiba does, it depends on a human to control it.

”People say what an amazing AI (artificial intelligence) we’re using for the robot. So I tell them: ‘well, it’s actually a middle-aged guy’,” Sakakibara told AFP during a press preview this week.

”Humans are more flexible in that they can recognise a huge amount of different information, but so far AI can only be used in limited situations” such as playing chess, he added.

”We thought it would be better to use humans instead of AI.”

Google, Apple, Facebook and Microsoft are among a growing number of technology firms that have been investing in making machines smarter, contending the goal is to improve lives through artificial intelligence.

Some critics, however, have warned that AI could turn on humanity and be its ruin instead of a salvation.

Less risky to the future of humanity was a robot arm made by automation parts maker Omron that can play – and coach – humans at ping pong.

The machine is now a Guinness World Record holder as the first robot table tennis tutor, according to the company.

”It can now understand if a player is a beginner or experienced and change how it plays,” said Omron’s Taku Oya, referring to the robot’s AI capabilities.

It can even give a compliment or two in text that appears on a screen beside the ping pong table.

”A perfect serve!” it says, or apologises for missing a ball.

Omron Corp.’s FORPHEUS, the world’s first robot table tennis tutor, is ready to play a table tennis with a man during the CEATEC Japan 2016 in Makuhari, near Tokyo, Japan. — EPA

”But its AI is not good enough so that it could beat professional table tennis players,” Oya warned.

Meanwhile, Sharp is taking aim at the housing market with pint-sized Rin-chan, which can operate home appliances based on its owners’ feelings.

For example, if a house dweller says ‘it’s too hot’, the robot will turn on the air conditioning.

Another star of the show is a mug-sized, doe-eyed robot called Kirobo Mini made by Toyota as a chatty companion for its human owners.

Meanwhile, Sakakibara hopes his little firm’s AI-free droid could be used as a translator or guide at airports and other tourist spots.

”This way, translators don’t have to run around – they can just sit at a central office and connect with the robots,” he said.

”It’s a more efficient use of manpower.” — AFP